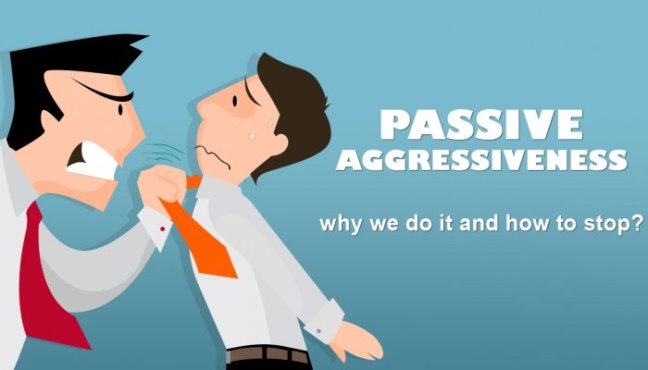 We have all seen passive-aggressive people.  This group is often represented by people who, on the surface, look calm and understanding, but below that surface look like a lava river. The difficulty with passive and passive-aggressive people is that there is no channel for communication built between them and you.  With openly aggressive people you see reactions, you hear words, you may even experience some action that shows you what they are thinking, what they want, etc. A passive person in the opposite is just sitting there with everything bottled up. The passive-aggressive person is taking it all behind your back in what they say to other people, or even what they do when you are not around them. Looking at a passive-aggressive person you may decide that this person won’t change and this does not matter for you at all. It is their choice to be passive-aggressive and you don’t have to feel guilty about that. But as long as you give those people the opportunity to show themselves, to speak up, it is OK for you.  They are grown-ups. The price you may pay with these people is often a reduced performance in their work. These people are dangerous because you don’t actually know what is in their heads.  You don’t have ana idea what they are cooking in their heads, and when will they blow it up to the public.

The best way to handle passive people is to start listening. You will have to take time to give them a chance to open up, without being rushed.  A good technique is to use questioning funnel where you start with open questions and then after you see a sustained reaction, you move to probe questions. If being in a situation when a passive person must work  on a well-established plan you may  start with :

The more you listen to them and show that you’ve listened by taking action on their ideas, the more they will open up to you. A stronger way to try to get passive people to be more open is to challenge them with something.  To do that you may start your talking with phrases like
I notice…
I interpret…

Or ask a question starting with what you think and finishing up with something like:
Am I right?…

For example, you can say something like that:
Mr./Mrs. X, I notice that you haven’t said anything, but you’re looking quite unhappy. It looks to me that you think it’s a bad plan. Am I right?
This forces the person to come out and say what her worries are, even though he/she probably doesn’t want to speak up and tell the whole team that the plan is no good.
In this situation, you will not try to change Mr./Mrs. X. You’re just trying to get him/her to speak up in this particular situation when the team needs to hear from him/her. And it will be crucial to understand that as informal the communication style you use is, the better results you will get.

The same technique can be easily adapted when dealing with rumors or things that you hear are said behind your back. For example, you   can say something like:

“Mr./Mr. X,  I hear that you think the pay plan for the next year is rubbish. Is that right? ”

“Mr./Mrs. X,  there are rumors that you strongly disagree with the new pay structure we are going to introduce. Is there some truth in this rumor?” etc.

Remember that in most cases the passive-aggressive people are observers and turned to their internal world thinkers. Their views of the situation may be very valuable if you understand how to involve them in the teamwork and decision. But the problem here is that they need to be asked.  The technique that you use with others that focuses more on speaking does not work with this group of people. So, instead of trying to push them to speak up,  it will be better to start with questions. You can ask them what they want to happen to ensure that the current  situation will change and if possible even involve them to be part of the solution. If you achieve that you will set a rule when the passive-aggressive person will have to interact with the team and you to achieve results. This will force them to change their attitude from negative to the positive side,  to start speaking up in front of the others, instead of rumoring in the background.

Passive-aggressive people are often underestimated as a source of decision and results boosters. Often they are seen from others only in the negativity of their behavior and that leads to excluding this group of people from the group decisions   The right approach, used to motivate and engage them with the team and your priorities can add significant value to your decisions a leader and the results your team has to deliver in short, mid and long term. Involved in the right way,  passive-aggressive people can become a valuable partner and a true corrective to the team decisions and strategies fulfillment and bring them to a new level.  But still,  the one that has to make the first step is YOU – as the leader.